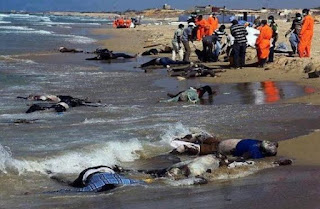 It's so painful as such able migrants gone too soon by drowning. Click the photo below to view more:


The Head of Coast Guard in Al-Garaboulli, Abdullatif Al-Munser, said the decomposed bodies that came ashore Al-Garaboulli suggest that the boat, which those migrants were on, drowned days ago, adding that it is very difficult to identify the dead migrants as their bodies are totally decomposed..Click below to view more:

He said they are probably from Eritrea and Niger. Local media recently warned of the resumption of the illegal immigration boat trips to Europe through the Libyan coast with the start of spring, which is regarded as a good time for migration by sea.The peports also indicates that there are at least 300 thousand African immigrants in Libya waiting to seize a chance to cruise for Europe on the human-traffickers’ death boats.
Share on: Facebook Twitter Google+ Linkedin Technorati Digg LintasMe

May thei33ëëêr souls rest in peace