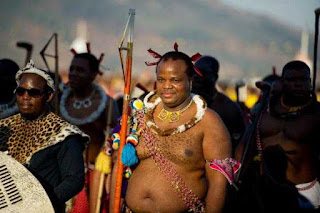 One of the 13 wives of Swaziland’s polygamous king has left the royal household after claiming he subjected her to physical and emotional abuse, it was claimed yesterday.
Angela ‘LaGija’ Dlamini, the sixth wife of King Mswati III, 44
, reportedly abandoned her palace on Saturday after telling relatives she had endured years of suffering.
Pro-democracy campaigners claimed the move followed a period of extended difficulty between Mrs Dlamini and her husband, who is Africa’s last remaining absolute monarch and has 13 current wives.
In a statement the Swaziland Solidarity Network said: ‘In what will not come as a shock, King Mswati’s sixth wife, Angela ‘Lagija’ Dlamini, has left the Swazi royal harem for good.
‘She left the royal household last night, citing many years of emotional and physical abuse by her husband as the reason for her departure.’
The South Africa-based organisation, which campaigns for democracy in Swaziland, quote an unnamed member of the royal family’s security team who claimed Ms Dlamini was now staying with relatives after fleeing her husband.
The statement continued: ‘A royal guard revealed that Angela had been unhappy for a long time and had actually thought of leaving her husband for many years
‘She finally packed her bags for good last night, initially pretending to be visiting her parental home in Hhohho.
‘From there she disappeared and is believed to be with relatives.’
The alleged departure of Mrs Dlamini, who has a nine-year-old child with her husband, makes her the second of King Mswati’s wives to leave the troubled royal household in recent months.
Last November it emerged that the polygamous leader had kicked his twelfth wife Nothando Dube, 23, out of her palace following claims she had cheated on him with a member of his government. 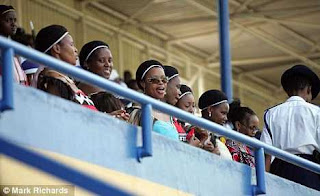 Royal harem: Some of the king’s 13 wives, pictured during Easter celebrations at Swaziland’s national stadium
Mrs Dube later claimed her husband had held her as a prisoner for more than a year after she was allegedly caught in bed in August 2010 with his close friend Ndumiso Mamba, Swaziland’s then justice minister who was sacked over the scandal.
South Africa’s Times newspaper today reported that Mrs Dlamini has now become the third of the monarch’s wives to walk out on him following claims of abuse.

The newspaper claimed former wife Delisa Magwaza, 30, was the first to leave and made her way to London via Cape Town.
She was reportedly followed by a second fleeing spouse Putsoana Hwala, 30, whom the newspaper reported left behind her three children.
King Mswati’s alleged marital troubles come amid continuing difficulties for the monarch, who has been heavily criticised for his autocratic leadership of Swaziland.
The landlocked southern African country gained independence from Britain in 1968 but remains one of the poorest on earth.

Absolute monarch: Mswati III at the royal wedding last year
Mswati III, who was educated at Britain’s exclusive Sherbourne School, now rules his one million subjects as an absolute monarch in conjunction with his mother.
He is permitted to take multiple wives under Swazi customary law and traditionally selects a new bride each year during the country’s annual Reed Dance festival.
In recent years the king’s rule has become increasingly controversial after he was criticised by human rights groups for refusing to allow democracy in the tiny country.
Swaziland’s constitution was suspended in 1973, opposition political parties are banned and Mswati appoints his government directly.
Last year the king faced widespread condemnation after he deployed the police to violently block protests against his rule.
Campaigners inspired by the Arab Spring uprising in northern Africa have repeatedly demanded reform in the mountainous kingdom, whose economy is teetering on the verge of collapse and which suffers from one of the world’s highest rates of HIV infection.
However Mswati has refused to weaken his grip on power.
The millionaire monarch, who spends his time in a string of luxurious palaces, sparked further outrage last month after it emerged he had acquired a personal private jet.
A spokesman for the government claimed the king was given the £30million DC-9 twin engine plane as a gift by a mystery donor. 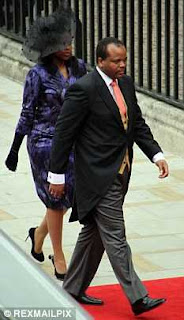 However activists later claimed he had purchased the jet himself by dipping into either public funds or his own massive personal fortune, which is believed to total around £60million.
Campaigners have criticised the monarch for the lavish lifestyle he enjoys while the majority of his subjects survive on less than $1USD a day.

Your style is unique compared to other folks I've read
stuff from. I appreciate you for posting when you have the
opportunity, Guess I'll just book mark this blog.

Its not my first time to pay a visit this site, i am browsing this web pge
dailly and get pldasant information from here daily.


Stop by my page: mobile hairdressers in peterborough

How to Lose Weight said...