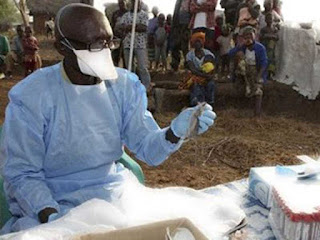 The Federal Government says Lassa fever has claimed 41 lives from 93 reported cases in 10 states of the country.
The News Agency of Nigeria (NAN) recalls that the federal government on Friday put the death toll at 40 out of 86 reported cases of Lassa fever outbreak in same 10 states.

The number of the suspected cases also rose from 86 last week to 93.

Prof. Isaac Adewole, the Minister of Health, confirmed this in Abuja on Tuesday at a joint ministerial news conference on the update of the outbreak of the disease.
However, Adewole said there were no new confirmed cases or death in the last 48 hours.
He did not disclose the state from which the additional life was lost.

“In the last 48 hours the government raised a four-man expert committee, chaired by Prof. Michael Asuzu, to visit Kano, Niger and Bauchi, the three most endemic states.
“The committee will embark on a fact finding mission, assess the current situation, document response experiences, identify gaps and proffer recommendations on how to prevent future occurrences,’’ he said.
Related Post:
Lassa Fever Kills One In Edo State, Spread To IMO State

The minister assured the public that the task of the committee was not to apportion blame but rather to document lessons learnt for better planning of an affective responsive.
According to Adewole, part of the long term response is to establish an inter-ministerial committee to deliver a final blow on Lassa fever and other related diseases.
The committee comprised the ministers of Education, Agriculture and Natural Resources, Environment, Information and Culture as well as Health.
Adewole advised communities to improve on their hygiene, including food hygiene and food protection practices.
Subscribe To Our Newsletter Here Please

He also urged the public to avoid contact with rodents and rats as well as food contaminated with rat’s secretions and excretions.
“Avoid drying food in the open and along roadsides, it is also important to cover all foods to prevent rodents contamination,’’ he said.

The minister said affected states have been advised to intensify awareness creation on the signs and symptoms of the disease.
According to him, the affected states are Bauchi, Nasarawa, Niger, Taraba, Kano, Rivers, Edo, Plateau, Gombe and Oyo.
Related post:
Lassa Fever Tragedy: Another One Gone To A Land Of See No More

“The public is hereby assured that government and other stakeholders are working tirelessly to address the outbreak and bring it to timely end,’’ said the minister.
He said the ministry had ordered for the immediate release of adequate quantities of “ribavirin’’, the specific antiviral drug for Lassa fever, to the affected states for prompt treatment of cases.

Adewole said Nigeria has the capability to diagnose Lassa fever, adding that “all the cases reported so far were confirmed by our laboratories’’.
NAN recalls that the first case of the current outbreak was reported from Bauchi in November 2015.
Love this post? Then Subscribe To Related Posts Here Please
Source: NAN
Share on: Facebook Twitter Google+ Linkedin Technorati Digg LintasMe

I was suggested this web site by my cousin. I am not
sure whether this post is written by him as nobody else know such detailed about my difficulty.

Have a look at my weblog :: Garcinia Gold Slim